Sep 8, 2010 4 min read
The NFL season is starting tomorrow night and I am in a survival league this year. If you are not familiar, in a survival league, each week you pick one team to win their game. Once you pick a team, you can no longer pick them for the rest of the season. So you have to balance pick who you think has the best odds of winning this week and what the rest of the team's schedule looks like.

There are some sites online that are very helpful for deciding which team to pick this week. One of them is http://www.survivorgrid.com/. I was wondering if there was a way to use this information to automatically decide which team to pick. This is an optimization problem with a lot of moving pieces, so simulation seemed like a natural choice.

I downloaded the spreads for each game from that website (using some expert Excel skills). From the lines, I was able to discern the probability of winning the game from this paper. (I found out about this method from the book Mathletics.) Basically, I just assume that margin of victory for the game is normally distributed with a mean equal to the spread (meaning the bookies are on average right) and a standard deviation equal to 13.86 points (as found in that paper). I finally calculate the probability that the margin of victory (>0) is in the team's favor. There are obviously a lot of assumptions here (I doubt the spread is normal plus we are dealing with discrete amounts), but at least this gives us a ballpark.

So now I have the probability of each team winning each of their remaining games. Next, I simulated. If I wanted to spend more time, I would have used a genetic algorithm or some other AI to try to find the best combination of picks. But I decided to go brute force because I didn't want to spend a lot of time. Here was my process:
Here are the 20 best simulations I came up with. You can see that the even the best have pretty low odds of going the distance. 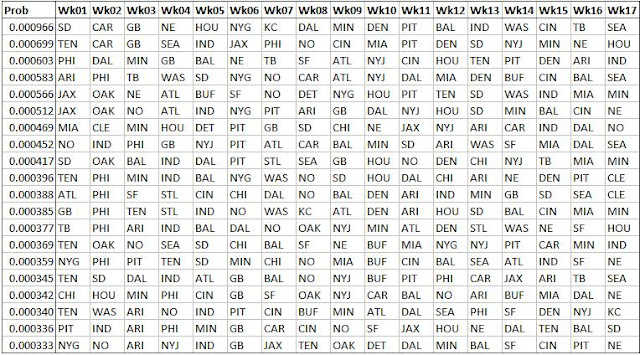 This is probably the best way to use this data rather than looking at the best combination of picks since the lines for the rest of the year will see a significant change as they get closer. This also agrees with Vegas Watch's analysis, which I like to see.

Andrew
I was thinking the same thing. I cannot think of an easy application to the way I have set up the problem though. I am currently trying to find the best probability of getting them all correct, so I really don't care who other people are selecting.
I would need to formulate the problem differently to account for that. I think I would also need to have an idea of what teams people have picked in the past and what strategy they will use in the future. Then I could run a simulation and see which team gives the highest probability of finishing in the top x%.
Vegas Watch
Interesting approach. It seems to me like this system would do a great job of taking into account probability of advancing to next week while saving as much future value as possible, but it doesn't factor in what % of people are picking each team, does it? I've found -- in much less complex analysis, generally just comparing two options -- that taking a less popular side can make up for a good deal of win probability. Doubt it will make a difference this week, but eventually there will be a team that's extremely obvious, so your sim says to take them, but half your pool is taking them as well, which presents a problem.